Yo, I’ve got a confession you can add to your roster

And the rumors aren’t true, sorry those who were hopin’

Though I have mad flow, I ain’t RAP BLOOD DOPIN’

WHEW, here it goes, OK, I HAD THE FUCKIN’ FLU

When it comes to making friends, I know this news ain’t advantageous

I cannot believe I got it, since I’m such a germaphobie

I always wash my hands, and got a flu shot as well

Bitch, I married a doctor simply for the free Purell

This is how I got the flu, I NOW WILL PUBLIC HEALTH ALERT IT

It was just a normal night, I was feelin’ good and perky

On the phone with my mom, mackin’ on some TURKEY JERKY

“Well, you sound a little sick,” my mother had to denote

“I just have turkey jerky ALL UP IN MY THROAT”

I tried to clear it out and then let out a cough,

“It’s the motha fuckin’ jerky! UGH MOM, BACK OFF”

She’s like, “I’m gonna hang up, but you’re sounding rather fluish”

And I’m like, “I’MMA HANG UP, YOU SOUNDIN’ MOTHERLY AND JEWISH”

So I put down the phone, took a breath and regrouped

And I turn on CNN “HEY SEXY LIL’ SANJAY GUPT“

He was talkin’ bout the flu and said, “The symptoms come on quickly”

And all of the sudden, bitch, I started feelin’ sickly

My body got real shaky and my muscles started achin’

(the original, BUT PROBABLY TAKEN 2 TOO, BITCH)

My temperature clocked in at a hundred and TWO

I spent the next week in a little fetal tuck

It wasn’t the jerky, my ma was right, motha FUCK

And the rest of the week, this was pretty much my story

I spend entire days in my bed with Roma Torre

All the comics would make jokes about the flu and when they went, “So you’ve heard about this flu?”

I would eek out a “REPRESENT”

I had an awesome dream my bestie was Maria Shriver

I looked just like the tortured guy in ZERO DARK THIRTY

Most people’s flus went longer, but my symptoms started slowin’

That’s because I had a flu shot, THANK YOU DOCTOR BARRY COHEN

So the moral of the story is, it just ain’t worth the plight

Wash your hands, get a flu shot, and your mother’s always right

Although, I will admit, I felt relaxed and kinda thin

And probably the trendiest that I’ve ever been

I think we can agree that I looked real frickin’ pretty. 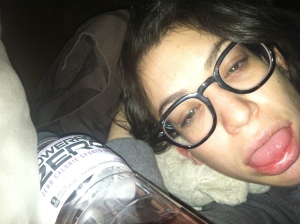 Some FRESH FLOW, YO.

LOTS o’ peeps be CLICKIN’ UP IN HEEEREE